Katja was presented with an exquisite glass silver fern trophy, reflecting the theme of the event which was ‘Silver Fern koru’.  The koru [Maori for “loop”] is a spiral shape based on the shape of a new unfurling silver fern frond, symbolic of new life, growth and peace – a very fitting theme for a cosmopolitan contest. 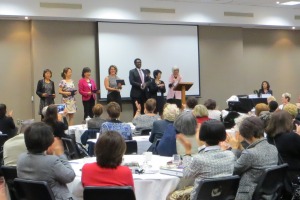 Six speakers vied for glory in a strongly contested Cosmopolitan Speech Contest at Convention 2015 in Rotorua in July.  The contestants in order of speaking were:

Lee Foon Lim:  originally from Malaysia, Lee represented Manitoba Council-at-Large. Her speech, to inform, titled ‘Happiness’ focused on the manners in which we seek and gain happiness. 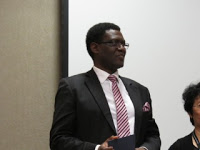 David Tomu of  New Zealand Region, entertained the audience with his speech to inform entitled “Beware the Terrible Twins’. David’s speech particularly connected with the audience as he described the mosquito in stereo. Originally from Zimbabwe, David’s performance proved the benefit of our training, as he started his membership only a short time ago, having completed a POWERtalk Short Course.

Katja Naethe:  originally from Germany, Katja represented the Australian Region as their first ever Cosmopolitan Speech Contest entrant. Katja gave a speech to inform entitled ‘Sandcastles and Highrises’. Packed full of fascinating information about sand as a resource, Katja enlightened us about the rate in which this resource is being used up, awakening a new perspective on the importance of a naturally occurring substance that the majority of us take for granted.

Setsuko Hada:  a member for only three years, Setsuko, from Japan region, provided a speech to inspire, entitled ‘Cultural Exchange’. Setsuko asked “What can Japan do?” The speech covered areas of food; language; and culture and customs.

Yasuko Kawashima:  a member of Japan Region’s Crystal Kobe club, Yasuko encouraged us to ‘Be Conceited’ in her speech to persuade. Yasuko’s speech included an excellent example of gesture when she stopped talking all together and used only mime for around 10 seconds of the speech, describing looking at a picture on a mobile device.

Sally Ma: a member of Waimea club for just over a year, was born in Communist China and did not expect to ever be living the life she now leads in New Zealand. Her speech to inspire, entitled ‘Life is not a Destination, but a Journey’ reflected her journey through many changes including her involvement in the Tiananmen Square protests of 1989. The light and shade in Sally’s voice as she described these events provided heightened emotional impact to what was a very moving story.

Nobody present envied the judges as it was an excellent standard of competition.